The dumb messengers is the new book of poems from Giles Goodland. A poet who oddly does not even have a wiki page yet - although you can discover that he is a lexicographer at the OED and was in the Eric Gregory Award class of 1994 - which also included  Julia Copus, Alice Oswald, Steven Blyth, and Kate Clanchy.

(poetandgeek can also confirm that he tried to swim over a reservoir but failed, has been chased by a bulldozer when demonstrating against the Newbury by-pass, and has lost his glasses in a tidal pool at least once; the last recovered by p&g in spite of some loss of skin.) 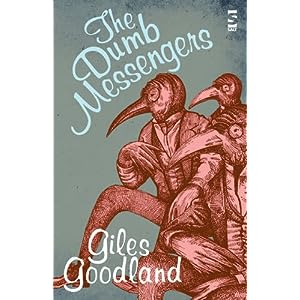 The fine-looking book collects shorter and lyrical poems Goodland has written over the last ten years alongside his language-driven output of books including Capital (Salt) and the impressive What the things sang (Shearsman). Poems themselves can be considered dumb messengers but Goodland's take on children and language adds a twist to this interpretation.