Robert MacFarlane's latest book covers much of the same ground that his readers will be familiar with. But then its subject is The old ways. 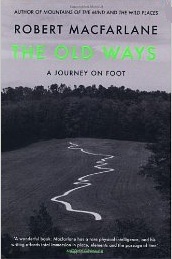 Excellent explorations of the ephemeral routes of tidal paths and seaways and contested and prohibited land. And a fascinating knitting together of Nan Shepherd, Eric Ravilious and the ever-present Edward Thomas who touchingly is caught watching in a sentry post chalkpit shortly before his death in 1917. "The sallow catkins are soft dark white..."

Although poet walks aren't much the focus of the book, walking as an act of creation is - the section on the memory walking of artist Miguel Angel Blanco is a revelation.

MacFarlance spends some time himself collecting words for walking.

Posted by Bridget Khursheed at 00:55

Email ThisBlogThis!Share to TwitterShare to FacebookShare to Pinterest
Labels: walking