Full moon fool that I am...to me there seems to be a special kind of creative force at work. 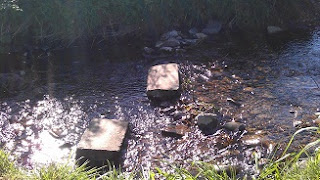 Tonight the moon just jumped right out of the sky at me through the window. Surprise. The sight made me want to write.

Insomnia, lunacy and werewolves. Science doesn't necessarily bear me out:

"Psychologists, however, have found that there is no strong evidence for effects on human behaviour around the time of a full moon. [] In one instance, the 23 December 2000 issue of the British Medical Journal published two studies on dog bite admission to hospitals in England and Australia. The study of the Bradford Royal Infirmary found that dog bites were twice as common during a full moon, whereas the study conducted by the public hospitals in Australia found that they were less likely."

But water, light - a kind of alchemy and transformation - take a look the child's causeway across the Huntlyburn above. Where will the path take you?
Posted by Bridget Khursheed at 11:57