Meet me at the cemetery gates...or to be more precise the Old Calton Burial Ground:

Alexander Hutchison says "A note of announcement to any friends or interested observers: I’ll be reading bits from my poem/pamphlet “Tardigrade" alongside David Hume’s mausoleum at 11.00 am on Saturday May 4th, and you would be very welcome to join me."

Keats and Yeats are on my side.

Violet and delicious and dark all wrapped up with string... 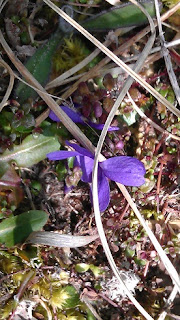 Our Issue 6 of poetandgeek.com is creeping up at you from the bare heath of the imagination and features new work from Richie McCaffery, Felino Soriano, Anne Pia, Andrew McCallum, Jennifer Martin, Alistair Noon and so much more...

We'll let you know when.

It was a worn whisper, dry and papery, and it brushed so distinctly across the ear that, by the accustomed, the material minutiae in which it originated could be realized as by touch. It was the united products of infinitesimal vegetable causes, and these were neither stems, leaves, fruit, blades, prickles, lichen, nor moss.
The return of the native Thomas Hardy
Posted by Bridget Khursheed at 12:31 No comments:

We like the thought of a bit of sunny weather especially when broken up by a brief hard summer storm of poetry. 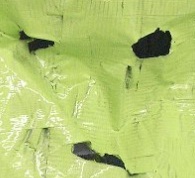 Each (?we only have dates for one so far...) night entices you with 2 spoken word artists; 2 musical acts and a series of curated animations - plus a maker's file showcase.

Spring arrives and the indefatigable Borders poet writes about death. 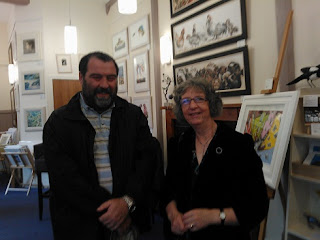 Andrew McCallum, the man from Biggar, whose work you can also read in the soon to be released Issue 6 of poetandgeek.com, does what he does best. Enjoy his enigmnatic twist on contemporary Scots life with a gothic dash here http://andramccallum2013.wordpress.com/2013/04/23/poking-dead-things-with-a-stick/
Posted by Bridget Khursheed at 00:09 No comments:

How drunk is the ancient mariner?

I amna fou' sae muckle as tired - deid dune.
It's gey and hard wark coupin' gless for gless
Wi' Cruivie and Gilsanquhar and the like,
And I'm no' juist as bauld as aince I wes.

invites the reader to expect a poem in the tradition of Scots drinking stories. It is a witty playful start - the speaker is worn out by lifting the glass to keep up with his drinking companions and he is not as bold as he once was. This reader thought of Robert Burns' 1791 Tam o' Shanter - another drinker whose pleasure is offset by the subconscious knowledge of the long Scots miles between himself and home and his surly spouse...

When chapman billies leave the street,
And drouthy neibors, neibors, meet;
As market days are wearing late,
And folk begin to tak the gate,
While we sit bousing at the nappy,
An' getting fou and unco happy,
We think na on the lang Scots miles,
The mosses, waters, slaps and stiles,
That lie between us and our hame,
Where sits our sulky, sullen dame,
Gathering her brows like gathering storm,
Nursing her wrath to keep it warm.
But at this point said reader - me - went off on a total tangent and thought about the start of the ancient mariner - all sailors love to drink - and how he grabs the wedding guest and won't let him get on because he is telling him an endless story; becoming in many ways himself the albatross around the wedding guest's neck.

Would Coleridge have known of Burns' work? And the usefulness of giving a poem a mischieviously drunken narrator or protagonist - a fabliau touch - that frees up the subject matter. He after all is more known for Kubla Khan like visions. Well first look at the dates. Samuel Taylor Coleridge wrote The Ancient Mariner as part of the Lyrical Ballads between 1797 and 1798. Just after Burns's death. Burns (1759 - 1796) was a little older than Coleridge 1772 – 1834 but not much. Burns' had been lauded as a poet a good ten years before that. And his subject matter, language, form and politics all spoke deeply to Coleridge.

Like MacDiarmid, Coleridge is then able to subvert expectations of where a drinking narrator will take you.

The thought suggested itself (to which of us I do not recollect) that a series of poems might be composed of two sorts. In the one, incidents and agents were to be, in part at least, supernatural, and the excellence aimed at was to consist in the interesting of the affections by the dramatic truth of such emotions, as would naturally accompany such situations, supposing them real. And real in this sense they have been to every human being who, from whatever source of delusion, has at any time believed himself under supernatural agency. For the second class, subjects were to be chosen from ordinary life...With this view I wrote the 'Ancient Mariner'.

And a final thought on the well-known lines:

followed by hallucinations of slimy things may refer not to the mariners dying of thirst so much as them finding themselves without any alcoholic drink - sailors of this period would have a daily ration of a quarter pint of neat rum twice a day. Water stored in casks would have gone bad on long sea journeys - a fact well-known in the previous centuries of sea travel.

Posted by Bridget Khursheed at 02:39 No comments:

2) it has a couple of pages devoted to a complex rhyme scheme - that only a few poets have attempted in hundreds of years - if you buy it for those pages alone you will be rewarded.
But it is a great read and mentions the ghazal tradition too.
Good stuff...more here http://en.wikipedia.org/wiki/Hare_Rama_Hare_Krishna_(1971_film) and on Jeet here http://www.faber.co.uk/catalog/author/jeet-thayil
Posted by Bridget Khursheed at 00:16 1 comment:

Issue 2 of the the online journal of the Scottish Centre for Geopoetics is out now and features new work from Scottish poets and writers including Elizabeth Rimmer (who also edited this issue), Bridget Khursheed and Susan Richardson.

Stravaig is a Scots word meaning a special kind of walk or tour; infinite and open-ended and minded...Robert Macfarlane gives a good definition in his book The Old Ways.

You can view it here http://www.geopoetics.org.uk/online-journal-stravaig/stravaig-issue-2/
Posted by Bridget Khursheed at 09:49 No comments:

Now available in the UK for the first time via Inpress Books...

"With a volunteer editorial collective of artists and writers at its heart, this US nonprofit art and publishing organisation, based in Brooklyn, New York has a mission is to produce artisanal and trade editions of new poetry, translation, experimental nonfiction, performance texts, and books by artists."

Posted by Bridget Khursheed at 09:44 No comments:

Following the huge success of our competiton last year, poetandgeek.com announces its 2013 competition. 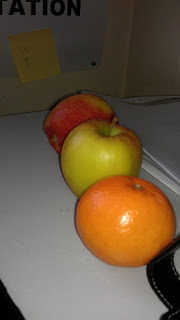 The deadline for entries is 30th August 2013 and winners will be notified by the end of September. Winning entries will be published in poetandgeek.com Issue 7. Entry is free.


Posted by Bridget Khursheed at 01:58 No comments:

First call for poetry for poetandgeek.com Issue 7. You know the kind of things we like. If you don't, we suggest you read a bit of the blog or go and visit previous issues of our magazine at poetandgeek.com 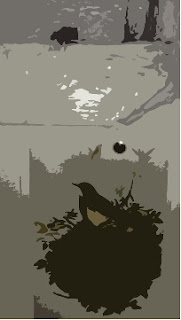 The deadline for submissions is 30th September 2013. A long way away we know but worth the wait surely.

And we haven't forgotten poetandgeek.com Issue 6: why would we? It is due out beginning of May and it is pure class.
Posted by Bridget Khursheed at 01:45 No comments:

poetandgeek.com is happy to announce its long-term storage for the benefit of poet and geeks in the future. 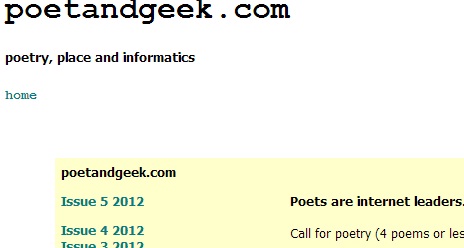 The British Library, one of a handful of state deposit libraries in the UK, will have legal backing from today to collect and store every UK site, blogs including this one, online magazines like our very own soon to be published poetandgeek.com Issue 6 (and all the rest) and ebooks, and the ephemera of Facebook and Twitter (to be regarded in the future something like the pamphlet writing of Daniel Defoe).

You can find out more here http://www.guardian.co.uk/technology/2013/apr/05/british-library-archive-webpages-tweets
Posted by Bridget Khursheed at 01:10 No comments:

Russian poet and writer Ivan Alekseyevich Bunin (Ива́н Алексе́евич Бу́нин) was inspired by gardens, travel and the Alupka palace (designed for Prince Mikhail Semyonovich Vorontsov by one of the architect team for Walter Scott's Abbotsford Edward Blore).The first Russian to be awarded the Nobel Prize for Literature, he was born in 1870 and died France in 1953 (having emigrated there shortly after the Revolution).

His visit to Alupka in the Crimea and the Vorontsov Palace in 1900 resulted in the poem Long alley leading down to the shore. This is a poem of sensual intent reminiscent of Tennyson's conflation of gardens, paths and sexual availability. But with a bitter sweet edge and a big sky. Pushkin meets Russian Symbolism.

More information here http://worontsovpalace.com.ua/ and the poem in Russian can be found here http://bunin.niv.ru/bunin/stihi/231.htm.

Hard to find a book of his poetry translated...let us know if you find one...
Posted by Bridget Khursheed at 07:24 No comments:

A very tasty retrospective of Peter Hughes' poems "most interesting and unclassifiable" from Shearsman is out this month. Hughes is an English poet and painter who lives literally on the edge in East Anglia and editor of the Oystercatcher Press.

"...a mind in evidence in the poems that can constantly surprise itself in the turns of speech, that can dance in the syllables and still have world and experience in its sights." John Hall
More information here http://www.shearsman.com/pages/books/catalog/2013/hughesSP.html and on Oystercatcher http://www.oystercatcherpress.com/.
Posted by Bridget Khursheed at 06:56 No comments:

The show is Radikal Words but really any chance to Jean "Binta" Breeze is the key. Don't miss it. Renowned Jamaican dub poet, director and playwright, her words resonate with the political/personal and joy to poetandgeek among many others - she has performed all over the world.

Show starts 7.30pm at Northern Stage. £7.50 is cheap for this! and you get to see Tony Walsh aka Longfella, was Poet in Residence at Glastonbury Festival 2011 too.

Posted by Bridget Khursheed at 00:16 No comments: