The house of Bulgarian poet Dimcho Debelyanov (Димчо Дебелянов) (1887 - 1916) is now a museum in Koprivshtitsa. After early wealth, the family left this house on the death of Debelyanov's father and moved throughout Bulgaria.This loss of place had an influence on Debelyanov's work (he wrote of Plovdiv - now a centre for European haulage - with regret, calling it "the sorrowful city"). 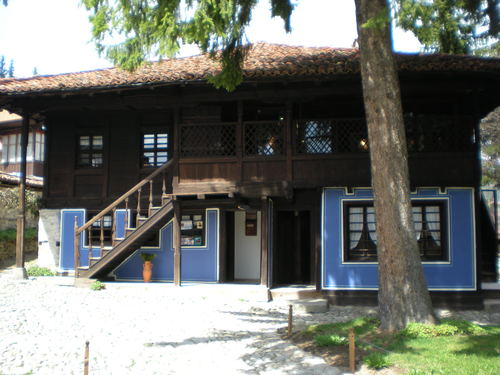 The house is beautiful with a lovely cobbled yard but as the family left the house, the interior is mostly museum-like but visitors comment on the warm atmosphere that remains.

Debelyanov's brief career through a variety of jobs ended in death in World War 1 fighting intriguingly with an Irish division. His fame as a poet was posthumous when his work was collected by friends after his death and published in a two volume anthology with his letters and notes. Today Debelyanov Point in Robert Island, South Shetland Islands is named after him.