Literature across Frontiers in Georgia

Most intriguing translation event in Georgia between the 9th – 14th September 2014.

Poets and translators from Georgia and the UK gather in Tbilisi for an intensive week of literary translation aiming to produce quality English translations of 6 Georgian poets: Rati Amaglobeli, Shota Iatashvili, Gaga Nakhutsvrishvili, Lela Samniashvili and Maya Sarishvili.  The work of the late poet and musician Irakli Charkviani will also be translated.

Thanks to Bill Herbert for bringing this and Literature across Frontiers, a European funded Welsh-based project which aims to develop intercultural dialogue through literature and translation and highlight lesser-translated literatures to our attention.

There is about a month left now to submit your work.The deadline this time is the 30th September 2014. 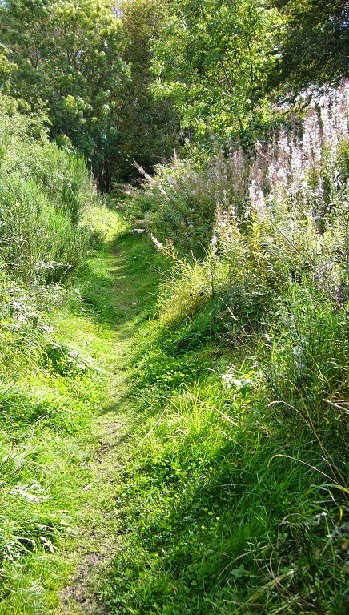 Thanks to all of you who have submitted already - we appreciate it and apologise again if you are waiting for a confirmation.We don't do things like that. Can't. But we will try and get back to you in October promptly once the deadline has passed.

Hope to hear from the rest of you soon!

You can take a look at past issues and find out how to submit here www.poetandgeek.com.
Posted by Bridget Khursheed at 08:53 No comments:

Just a little bit of time to enter this competition which commemorates the achievements of the fabulous Flambard Press - publishers of Peter Bennet amongst others - and Peter is one of the judges too along with Gladys Mary Coles.

The Flambard Prize will be awarded annually to the best group of five poems submitted by a poet who has not yet published a single-authored pamphlet or collection.
Deadline is 1st September 2014 so not joking about the need to get your skates on.
More here http://www.ncl.ac.uk/ncla/competitions/flambard
Posted by Bridget Khursheed at 12:49 No comments:

Don't miss! Short notice but an opportunity to see Douglas Dunn reading is worth taking.

Our inimitable friends at N!R! are launching their publishing arm and you can also see poet and novelist Jenni Fagan, and hosts and co-founders Michael Pedersen and Kevin Williamson. Expect words, music and if you are lucky a raffle of the absurd... 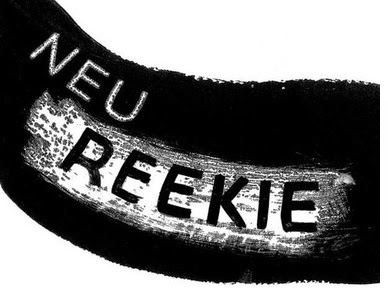 20:30–21:30 at the Edinburgh International Book Festival
Charlotte Square Gardens, EH2 4DR Edinburgh. Allow plenty of time because Edinburgh is busy! (Plus I am informed there is a chance of rain - the question is....when isn't there?) Tickets £10 and less.

Posted by Bridget Khursheed at 00:56 No comments:

This sounds a good idea. Simply call in to share your poetry or if you prefer listen to amazing poets. The show is hosted by poets J Todd Underhill and Michael Amadei and JT Gunter.

a radio show dedicated to you, the poet. We realize that poetry is a form of expression, scratch that..actually, more of an obsession to many around the world. To this end, we have created this show to give poets a venue to have their work heard. Our mission is to build the international community of poets into a thriving group that both creates incredibly poetry but also helps each other rise to new heights. 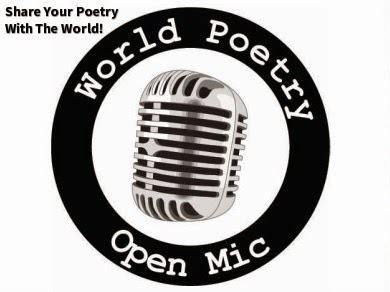 You can find out more about this event here https://www.facebook.com/events/776841159014096/?notif_t=plan_user_invited and here http://www.worldpoetryopenmic.net/.
Posted by Bridget Khursheed at 23:30 No comments:

A very nice book on Scott crossed our path today here at p&g. The kind of book Scott enthusiasts have been waiting for.
It is by Christopher Harvie and he describes some talks he is giving below: if you don't know Scots - Chris says he'll be speaking in English too.
Tales o' anither Grandfaither, Chris Harvie an his Chapbuiks: he’ll tell ye three tales aboot Sir Walter an oor Borderland, tho he’s a kynd chiel, an they’re no aa in the auld tung! An there’s rhyme an (un)reason forbye. 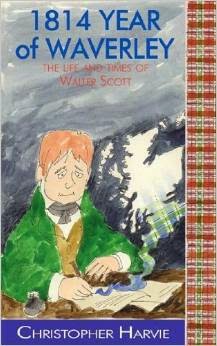 You can catch Christopher Harvie's talks at Abbotsford - the home of Walter Scott (i the Gift-hoose …as Harvie puts it)- where he will be signing books on the 17th August 2014. They also have an archery competition. Nice stuff. Scott virtually invented Robin Hood as we know him today.

More on how to get the book here http://www.amazon.co.uk/gp/product/190893123X/ref=ox_sc_act_title_1?ie=UTF8&psc=1&smid=A3P5ROKL5A1OLE and the Abbotsford event here http://www.scottsabbotsford.com/events/ or @AbbotsfordScott
And btw if you haven't found us on Twitter yet - it is @poetandgeek
Posted by Bridget Khursheed at 23:56 No comments:

A grand night out in the company of the two poets - topping my current want-to-hear list - courtesy of the Scottish Poetry Library and The Wordsworth Trust (at which Kunial is currently Poet-in-Residence). And as suggested by poetandgeek.com.

Zaffar Kunial is also a Faber New Poet for 2014. John Glenday needs little introduction: his collections Undark and Grain were Poetry Book Society Recommendations. (btw when is someone going to republish his excellent The Apple Ghost?) 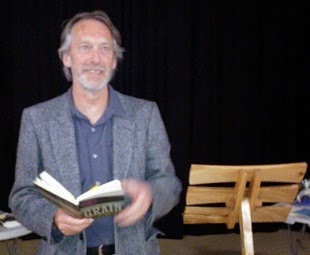 This event takes place at 6.30pm at the Scottish Poetry Library - found at 5 Crichton’s Close, Canongate, Edinburgh EH8 8DT. And you need to book a ticket. Price is £5/£4 (concessions) - this intriguing meeting of poets will be well worth it!

You can find more here and book http://www.scottishpoetrylibrary.org.uk/connect/events/zaffar-kunial-and-john-glenday.
Posted by Bridget Khursheed at 10:57 No comments:

Searching for the sons of poet Leslie Reid

Thank you so much to everyone who has been helping us return Leslie Reid's poetry legacy to his sons over the past 24 hours. Help has come from around the globe including much appreciated backing from poets Judith Taylor and Jane Aldous and from Don Share the editor of Poetry magazine. 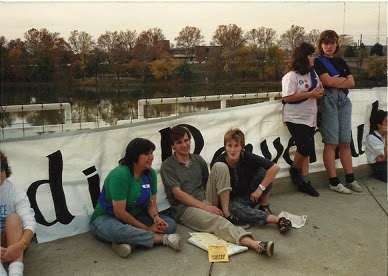 Leslie Reid in Columbus, Ohio with Bridget Khursheed and Srimati Basu 1990
Although we have had some leads, but we haven't yet found Lez's sons and are relying on your help to do so. Thanks to those of you who have put us in touch with the local Devon press. And as suggested, here is a picture of Leslie Reid the year before he died - probably at a similar age to his sons Joseph Reid and Duncan Reid. Perhaps this will help jog memories.
Posted by Bridget Khursheed at 06:28 No comments:

Poetic inheritance in a Marks and Spencer bag

Can you help restore poetry to its rightful owners?

A friend of ours has been in touch with a bag of poems written by Leslie Trevor Reid (April 11th 1964 - January 30th 1991). Leslie was a warm and gifted poet with a unique voice - compared to John Skelton by American poetry professor David Citino - who grew up in Oxford later working as a bricklayer but also spent time attending classes at Ohio State University, USA. Leslie died tragically young in a car accident. He had just started publishing but, in the days before social media has left little trace except for a poetic inheritance in an M&S bag. 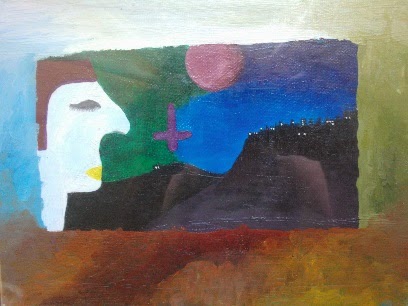 At the time of his death, his two sons Joseph and Duncan were very small and went to live with their mother Kay in Brixham in Devon. All contact was lost and the poems were put into storage in the Scottish Borders. These young boys will now be in their late twenties. And probably have little knowledge of what their Dad wrote or created.

Can you help return the poems - some of which concern them directly - and Lez's picture as shown to its rightful owners? Get in touch in the usual way.

And thanks. It is about time.
Posted by Bridget Khursheed at 10:56 No comments:

There is a lot to choose from. In fact a possibly overwhelming choice! But how do you make sure you return from your writing holiday satisfied and stimulated? 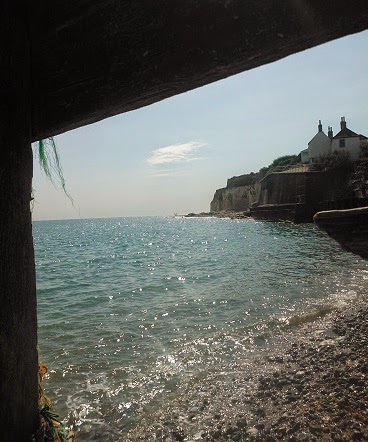 Don't learn the hard way: here are some things to consider...

Posted by Bridget Khursheed at 02:34 No comments: