This book of border poetry - in every sense of the word - is out on the 1st May 2015 - an auspicious day for a launch we judge. And of course we hope so - as Bridget Khursheed is the p&g editor. 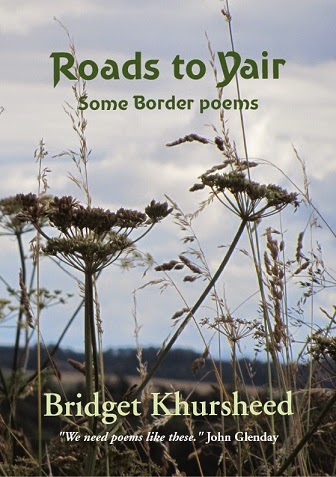 Bridget explains the origin of the word yair:

The title of the collection refers to a yair: this is both an old Scots word for fish trap and a quiet spot in Tweeddale where once in 1156 King Malcolm allowed the monks of Kelso to build a dam on the river to create a pool to fish. The word Yair became the place name and made the map.
The Borders landscape sometimes appears empty; its spaces home to few inhabitants or lines on the map, no motorway and not even a running railway until recently. But our Borders also house a suggestive otherworld: a pool to fish for a past and present that is hidden from view; the myth, magic, industrial and literary excellence, invention, nature, music, saints, sinners and of course our Border folk.
Many poets of great skill have woven the Borders landscape into song. To that legacy, I add these poems - my yairs - to capture a contemporary truth that lies somewhere between the map, its roads and rivers and the landscape.

You can purchase the book at Twinlaw Publishing here http://twinlawpublishing.co.uk/ and in Borders bookshops.
Posted by Bridget Khursheed at 12:10