Keith Douglas (1920 - 1944) was an English poet and soldier. He was killed in action during the Normandy invasion in World War Two. There is readily available criticism of Douglas online but not so much poetry.
His splendid poem The Marvel below is referenced only in quotes so I have added it here. Its direct language and observation is counterpointed by Douglas' metaphysical, intelligent and slyly humorous reading of the scene. 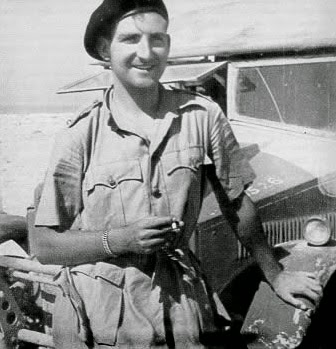 A baron of the sea, the great tropic
swordfish, spreadeagled on the thirsty deck
where sailors killed him, in the bright Pacific

yielded to the sharp enquiring blade
the eye which guided him and found his prey
in the dim place where he was lord.

Which is an instrument forged in semi-darkness;
yet taken from the corpse of this strong traveller
becomes a powerful enlarging glass

reflecting the unusual sun's heat.
With it a sailor writes on the hot wood
the name of the harlot in his last port.

For it is one most curious device
of many, kept by the interesting waves
for I suppose the querulous soft voice

of mariners who rotted into ghosts
digested by the gluttonous tides
could recount many. Let them be your hosts

and take you where their forgotten ships lie
with fishes going over tall masts -
all this emerges from the burning eye.

And to engrave that word the sun goes through
with the power of the sea
writing her name and a marvel too.


More on Keith Douglas can be found here http://en.wikipedia.org/wiki/Keith_Douglas and four of his poems appear in Ted Hughes and Seamus Heaney's well-known 1982 anthology The Rattle Bag.
Posted by Bridget Khursheed at 23:53