Silence from inside the house and then she laughs, “It’s your responsibility.” She doesn't laugh very often and never if something is funny. I take refuge in repetition. 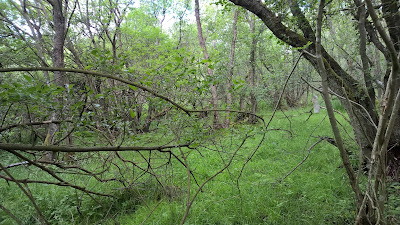 We had decided to move to the Wood Area in accordance with a naïve belief that it would be good for our children. We have two. Neither had developed differently as a result of exposure to woodland. I have never seen them engaged in formative play involving trees. But the resulting blame for the rabbit must fall onto them.
It is lying on our doorstep. I put it there myself as a kind of homage to the old-style grocery delivery from the days before our food was provided. Wood Area houses resemble the plusher Midwestern small town dwelling of the old United States, complete with verandah and white-painted weatherboards. And I congratulate myself that I had picked a particularly good one, being something of a student of that region; my wife planting out the garden herself. Together we have made a whole and harmonious picture. None of which helps me with the rabbit.

It lies skew with but attractive still with a handsome pelt of white fur; tufted with black to avoid the red eyes of the true albino. The typical mark of the Directors’ care as they struggle to preserve the most attractive fauna. My eyes wander to the step beneath, stained green with the lichen I had transplanted there a few days earlier. I am a lover of the authentic. The rhubarb that sags over the steps, to another’s eyes perhaps untidily, was also developed on purpose.

“Get out here, dammit,” I repeat under my breath. There has been too long a pause for me to recapture my anger. And I know she will come eventually. I bend over the step to stare through the glass of our back door. Inside, behind the decorative insect-net, my wife must be sitting out of sight with our daughter Beth. They are waiting for me to sort it out.

Frankie, my son, is peeping out through the door. Our eyes meet in a kind of collision and I step back and away. In spite of the situation, the first sight of death is too much for his curiosity. He opens the door a little. I notice it was not locked.

Frankie considers. “No-de-ho!” He is almost twelve and given to impersonations of television celebrities of dubious talent. Television being another concession to our children. I feel unreasonably angry with him and try to hide it by looking at the rhubarb.

“I’m coming in,” I say but falter since the rabbit is on the doorstep where my feet should go. It seems bigger than it is. By the time I reach for the door, Frankie has shot the bolt.

“Mum says you can’t,” he says regretfully. “Not until.” I feel bitterly that his regret is for the loss of the dead rabbit. And when I turn back to the garden, I notice tears coming into my eyes. I face the garden then entirely. I am not going to weaken. She will let me in and she will get cooking.

I hear her low chittering of comfort to Frankie behind me. The boy must have crept back to her. We’re supposed to be the ones in this together. I consider battering down the door but it is built to modern standards. The anger returns and I walk to the end of the garden. I should walk out and leave the gate open leaving them all in the stew. I laugh then for the same reason as my wife.

Earlier we had discussed it all, more rationally, inside the house.

“You have to do it, it’s your turn,” I’d said. We were sitting in our sunny lounge with its wooden floor and, so far, our somewhat scant collection of reproduction furniture. Our whole dwelling unit was a testimony to our shared responsibility. I had been making those chairs and table for the house from kits. My contribution to the inside décor while my wife, as I have said, did the garden. Nothing had been too much trouble in our joint search for a more natural, planet-based lifestyle for the kids.

“You are insane if you think I am going to touch it,” she replied. Her voice was calm and, although she had stationed herself at the far end of the sofa, she was knitting something for the children.

“Calm down, it’s different I know, but it’s the logical conclusion.”

“Of what?” She shouted. She stopped knitting and started playing with the needles, one of her more irritating gestures.

“Don’t do that,” I said. The needles had been a gift from me some years ago before we moved here and were very hard to get hold of. “You’ll break them.”

“Oh sod the needles, David. Go and skin that bloody rabbit. I’ll cook then and you can eat it, and problem solved. But don’t give me any more shit about logical conclusions and recreating past values. We came here because you got a good job. I did the garden because it looks nice. And there was nothing wrong with eating vegetables now and then.”

Her voice petered out at the end because she knew I would not believe what I was hearing. Years of planning and decision-making reduced to coincidence and a nice look. I grabbed her hand and the needles, putting the latter to one side.

“I could have had a job anywhere.” My voice was calm too, although I was not. “You, of all people, know my qualifications.” But she pulled away.

“I am not eating that rabbit,” she yelled, starting to get up. “And neither are the children.”

“But it’s the children’s fault.” I shouted after her but she had already left.

In the garden I reflected, it was indeed the children’s fault that the rabbit had got into our house. A Wood Area expedition as a family one weekend had resulted in Frankie and Beth’s introduction to rabbits. The Wood Area, while it primarily acts as a source of wood for the reproduction business, does have some function as a recreation environment. In both senses of the word: you can spend leisure time there, and it recreates the plants considered useful or decorative. Foxgloves for its digitalis and Christmas holly for example are encouraged. How rabbits got into the picture I do not know. But my children liked them and thought they were pretty and, since this was their first interest in the natural world, my wife and I decided to bend the rules a little and bring one home for a pet.

We had been bending the rules like this since we arrived. All around me in our garden are the plants that strictly speaking are not supposed to leave the Wood Area. I know for a fact that all Wood Area workers have such plants. Maybe just a pot or two, and maybe not on such a large scale as us, but something. Perhaps it was the scale that irritated the Directors or my wife’s suggestion that we eat the vegetables and complete our own personal dream of recreation. It does not matter now, but circumstances had contrived to make my bosses irritable long before we got the rabbit. And a letter came this week telling us to put it back where it belonged.

With the result that after our several tussles, I am now shedding tears onto flowers and vegetables. All desire to leave the garden has gone. My anger has gone. Only the absolute logic of eating the rabbit remains and my shoulders heave at the thought of it. Finally I sense my wife approaching behind me. I didn’t hear the door open but she must have given in at last. I pretend not to notice until she puts a hand on my shoulder.

We kiss. The completion is at hand.

For along with my love of Midwestern houses, I cherish a dream based on their interiors. The values they represented. Mother at home in the kitchen, Children healthy and active, sun-bronzed and honourable and ready to grow into good citizens. And Father bringing home the bacon fulfilling his part in the picture. The salary. The paid holidays. But also the outings with the kids and the jobs around the house.

And I suppose that is why I killed the rabbit.