Dorothy Wordsworth on the Scottish Borders

Monday, September 19th.—We rose early, and went to Melrose, six miles, before breakfast. After ascending a hill, descended, and overlooked a dell, on the opposite side of which was an old mansion, surrounded with trees and steep gardens, a curious and pleasing, yet melancholy spot; for the house and gardens were evidently going to decay, and the whole of the small dell, except near the house, was unenclosed and uncultivated, being a sheep-walk to the top of the hills. Descended to Gala Water, a pretty stream, but much smaller than the Tweed, into which the brook flows from the glen I have spoken of. Near the Gala is a large modern house, the situation very pleasant, but the old building which we had passed put to shame the fresh colouring and meagre outline of the new one. Went through a part of the village of Galashiels, pleasantly situated on the bank of the stream; a pretty place it once has been, but a manufactory is established there; and a townish bustle and ugly stone houses are fast taking place of the brown-roofed thatched cottages, of which a great number yet remain, partly overshadowed by trees. Left the Gala, and, after crossing the open country, came again to the Tweed, and pursued our way as before near the river, perhaps for a mile or two, till we arrived at Melrose. The valley for this short space was not so pleasing as before, the hills more broken, and though the cultivation was general, yet the scene was not rich, while it had lost its pastoral simplicity. At Melrose the vale opens out wide; but the hills are high all round—single distinct risings. After breakfast we went out, intending to go to the Abbey, and in the street met Mr. Scott, who gave us a cordial greeting, and conducted us thither himself. He was here on his own ground, for he is familiar with all that is p. 256known of the authentic history of Melrose and the popular tales connected with it. He pointed out many pieces of beautiful sculpture in obscure corners which would have escaped our notice. The Abbey has been built of a pale red stone; that part which was first erected of a very durable kind, the sculptured flowers and leaves and other minute ornaments being as perfect in many places as when first wrought. The ruin is of considerable extent, but unfortunately it is almost surrounded by insignificant houses, so that when you are close to it you see it entirely separated from many rural objects, and even when viewed from a distance the situation does not seem to be particularly happy, for the vale is broken and disturbed, and the Abbey at a distance from the river, so that you do not look upon them as companions of each other. And surely this is a national barbarism: within these beautiful walls is the ugliest church that was ever beheld—if it had been hewn out of the side of a hill it could not have been more dismal; there was no neatness, nor even decency, and it appeared to be so damp, and so completely excluded from fresh air, that it must be dangerous to sit in it; the floor is unpaved, and very rough. What a contrast to the beautiful and graceful order apparent in every part of the ancient design and workmanship! Mr. Scott went with us into the gardens and orchards of a Mr. Riddel, from which we had a very sweet view of the Abbey through trees, the town being entirely excluded. Dined with Mr. Scott at the inn; he was now travelling to the assizes at Jedburgh in his character of Sheriff of Selkirk, and on that account, as well as for his own sake, he was treated with great respect, a small part of which was vouchsafed to us as his friends, though I could not persuade the woman to show me the p. 257beds, or to make any sort of promise till she was assured from the Sheriff himself that he had no objection to sleep in the same room with William. 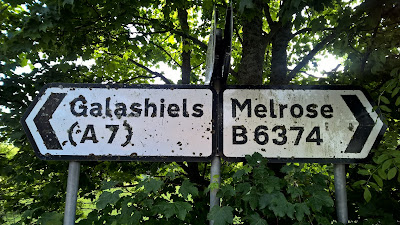