Well thanks for that update p & g. And for making me sounding like a total ego-head.

In response, I guess that is what insta and possibly being a maker of any kind is all about.  On insta you are making photos and clearly creating an illusion even if counter - intuitively an illusion that everything you put on there is spontaneous. At least one account I follow does appear to do that. 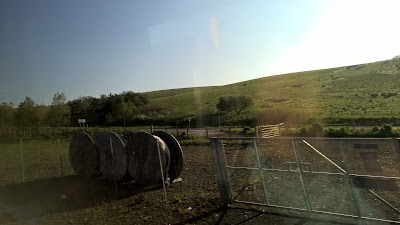 The clash between what appears and what is has been central to everything I write. Blame George Eliot, Hardy, James and above all Dickens if you like. And countless A-level and uni exam questions on Appearance and Reality from Little Dorrit onwards. And then blame life and experience. For example, the idea that the borders was once a highly developed industrial centre exporting wool to Flanders in mediaeval times and cloth globally tends to get lost sight of - especially as the general electorate has gone back to forelock-tugging the Tories. How can rural be industrial? How can empty space - the dull landscape that Dorothy Wordsworth dismissed - be full?

A couple of Sundays ago I was walking around near Harestanes by Ancrum and found more ramsons and bluebells growing just a few metres off the A68 than seemed believable. A burn raced by and growth was luscious. I had come with a friend. All good. But when my eye is in I always catch sight of the old wall overgrown by ivy. The space where a huge beam once rested. And after that it started to be quite easy to pick out channels and pools where the water had once sped through and turned the mill wheel. The random mounds and pits were engineering spaces. The beauty. The lushness. Perhaps at some level they still fed on rich soil from the old mill midden.

So I enjoy insta: for example, the work of Ben Lingard mentioned below, parkour heroes and concrete firms, beautiful cups of coffee and some work going on in general. Everything reduced to a column of boxes and that of course the schematic I also find rather appealing.

And for that final touch of the ego glad to have a poem coming out in Under the Radar in Autumn - thanks guys.

Posted by Bridget Khursheed at 08:28