I cannot work out if I like her or really really hate her at the moment. It used to be very definitely the former so any slip from that position is confusing.

I have sat the book in the bathroom so I can look at it now and then to try and decide how I feel. The passage below is one of many that has made me laugh a lot. I imagine the Scotts fast asleep or otherwise engaged and then lingering in bed for as long as possible; "have they gone yet?" they would have asked each other. Or maybe they had nothing for breakfast - James Hogg famously complained of Scott's poor egg and roll petit dejeuner hospitality and had to reeducate him*. Dorothy's slightly peevish comment "[we] waited some time in a large sitting-room". Perhaps this was why Scott was so helpful later on in their journey. I had forgotten that the Scotts themselves lived close to Roslin at this time before the Abbotsford years (when Scott would copy features of the chapel in his library - he was of course a mason himself). So as usual everything annoying about Dorothy the guest nobody wants to see with her dull brother until you get to the description of the fern in the chapel which takes me even further (than Hogg's breakfast) on an Umberto Eco travel in hyperreality and suddenly I like her again.

Confusing - see for yourself:

Saturday, September 17th.—The morning very fine.  We rose early and walked through the glen of Roslin, past Hawthornden, and considerably further, to the house of Mr. Walter Scott at Lasswade.  Roslin Castle stands upon p. 246a woody bank above a stream, the North Esk, too large, I think, to be called a brook, yet an inconsiderable river.  We looked down upon the ruin from higher ground.  Near it stands the Chapel, a most elegant building, a ruin, though the walls and roof are entire.  I never passed through a more delicious dell than the glen of Roslin, though the water of the stream is dingy and muddy.  The banks are rocky on each side, and hung with pine wood.  About a mile from the Castle, on the contrary side of the water, upon the edge of a very steep bank, stands Hawthornden, the house of Drummond the poet, whither Ben Jonson came on foot from London to visit his friend.  We did hear to whom the house at present belongs, and some other particulars, but I have a very indistinct recollection of what was told us, except that many old trees had been lately cut down.  After Hawthornden the glen widens, ceases to be rocky, and spreads out into a rich vale, scattered over with gentlemen’s seats.
Arrived at Lasswade before Mr. and Mrs. Scott had risen, and waited some time in a large sitting-room.  Breakfasted with them, and stayed till two o’clock, and Mr. Scott accompanied us back almost to Roslin, having given us directions respecting our future journey, and promised to meet us at Melrose two days after.
We ordered dinner on our return to the inn, and went to view the inside of the Chapel of Roslin, which is kept locked up, and so preserved from the injuries it might otherwise receive from idle boys; but as nothing is done p. 247to keep it together, it must in the end fall.  The architecture within is exquisitely beautiful.  The stone both of the roof and walls is sculptured with leaves and flowers, so delicately wrought that I could have admired them for hours, and the whole of their groundwork is stained by time with the softest colours.  Some of those leaves and flowers were tinged perfectly green, and at one part the effect was most exquisite: three or four leaves of a small fern, resembling that which we call adder’s tongue, grew round a cluster of them at the top of a pillar, and the natural product and the artificial were so intermingled that at first it was not easy to distinguish the living plant from the other, they being of an equally determined green, though the fern was of a deeper shade.
We set forward again after dinner.  The afternoon was pleasant.  Travelled through large tracts of ripe corn, interspersed with larger tracts of moorland—the houses at a considerable distance from each other, no longer thatched huts, but farm-houses resembling those of the farming counties in England, having many corn-stacks close to them.  Dark when we reached Peebles; found a comfortable old-fashioned public-house, had a neat parlour, and drank tea.


From Recollections of a Tour Made in Scotland A.D. 1803 and you can read the full text here at Project Gutenberg for nothing.

*Hogg invited Scott to visit for breakfast and when he saw him coming laid out everything in the house for a week and then claimed it was an everyday meal - breakfast was never lacking in Scott's residences for Hogg thereafter even including "reindeer tongue"! this story is found in James Hogg's delightfully frank Anecdotes of Scott. 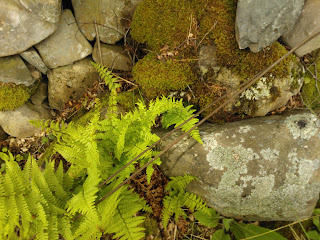 Posted by Bridget Khursheed at 09:00