The poem Inversnaid is one of Gerard Manley Hopkin's best known. You have to love a poem that uses the verbs deg and twindle not to mention the phrases horseback brown and the groins of the braes. And I actually saw  "a windpuff-bonnet of fáwn-fróth" turning and twindling yesterday on my bird survey so here it is: 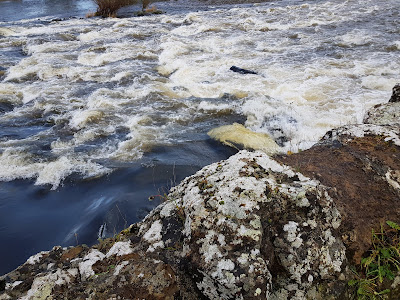 
THIS darksome burn, horseback brown,
His rollrock highroad roaring down,
In coop and in comb the fleece of his foam
Flutes and low to the lake falls home.

A windpuff-bonnet of fáwn-fróth
Turns and twindles over the broth
Of a pool so pitchblack, féll-frówning,
It rounds and rounds Despair to drowning.

Degged with dew, dappled with dew
Are the groins of the braes that the brook treads through,
Wiry heathpacks, flitches of fern,
And the beadbonny ash that sits over the burn.

What would the world be, once bereft
Of wet and of wildness? Let them be left,
O let them be left, wildness and wet;
Long live the weeds and the wilderness yet. 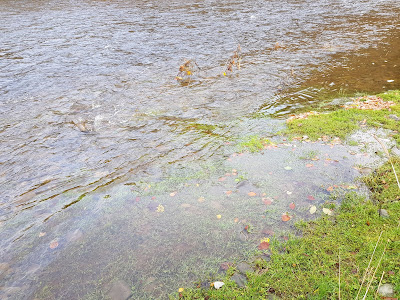 Here also is a great lipsynch version by Tootight Lautrec of this poem read by Diana Rigg which gets the intonation of fáwn-fróth correct unlike many I checked out https://vimeo.com/195485335.

Did Gerard Manley Hopkins visit perhaps because he had read about it in Doz's recollections.

September 12th Monday—Rejoiced in the morning to see the sun shining upon the hills when I first looked out through the open window-place at my bed’s head.  We rose early, and after breakfast, our old companion, who was to be our guide for the day, rowed us over the water to the same point where Coleridge and I had sate down and eaten our dinner, while William had gone to survey the unknown coast.  We intended to cross Loch Lomond, follow the lake to Glenfalloch, above the head of it, and then come over the mountains to Glengyle, and so down the glen, and passing Mr. Macfarlane’s house, back again to the ferry-house, where we should sleep.  So, a third time we went through the mountain hollow, now familiar ground.  The inhabitants had not yet got in all their hay, and were at work in the fields; our guide often stopped to talk with them, and no doubt was called upon to answer many inquiries respecting us two strangers.

At the ferry-house of Inversneyde we had not the happy sight of the Highland girl and her companion, but the good woman received us cordially, gave me milk, and talked of Coleridge, who, the morning after we parted from him, had been at her house to fetch his watch, which he had forgotten two days before.  He has since told me that he questioned her respecting the miserable condition of her hut, which, as you may remember, admitted the rain at the door, and retained it in the hollows of the mud floor: he told her how easy it would be to remove these inconveniences, and to contrive something, at least, to prevent the wind from entering at the window-places, if not a glass window for light and warmth by day.  She replied that this was very true, but if they made any improvements the laird would conclude that they were growing rich, and would raise their rent.

The ferryman happened to be just ready at the moment to go over the lake with a poor man, his wife and child.  The little girl, about three years old, cried all the way, terrified by the water.  When we parted from this family, they going down the lake, and we up it, I could not but think of the difference in our condition to that poor woman, who, with her husband, had been driven from her home by want of work, and was now going a long journey to seek it elsewhere: every step was painful toil, for she had either her child to bear or a heavy burthen.  I walked as she did, but pleasure was my object, and if toil came along with it, even that was pleasure,—pleasure, at least, it would be in the remembrance.

What would the world be, once bereft
Of wet and of wildness? Let them be left,
O let them be left, wildness and wet;
Long live the weeds and the wilderness yet.

*The stray capital in Inversnaid in the phrase Despair to drowning is sic as far my research goes.
Posted by Bridget Khursheed at 06:18