This article first appeared in The Journal

In this, her second and last book of poems in Gallego, de Castro confounded expectations using the language to explore the intensely personal and tragic. The "new leaves" in question are no idyllic pastoral as she makes clear in the title poem:

Not new leaves: a spray
of gorse and brambles…

De Castro is well-aware of the controversy she is likely to produce. In the foreword, she confronts the problem pointing out that women can write only ‘in honey’ […pero mel sempre e nada máis que mel.]. She adds that her character and the poems’ lack of preparation (the latter a disingenuous claim) force her to add a bitter note. Her sensibility is clear in following poem.

I am sick and there is no cure.
A sickness born within me,
so wicked an enemy:
it will carry me to my grave.

Healers, surgeons, doctors,
in all your medicine
there is no human remedy
for this infirmity of mine.

Quit your ponderings
conscious or unaware
your science books,
they hold nothing for me.

What don’t you believe me?
There’s no doubting, doctors.
Some griefs are terminal
resistant to your cough syrup.

Are you provoked by my words?
You know I speak the truth.
Then prove it. Get to work.
Let’s see you help me, friend. My illness and suffering
are deep in my own heart.
Remove that without pity
then, I’ll have my cure.

This is the first poem that I tried seriously to translate. Its ballad structure remains but the abba rhyme scheme is dropped to bring immediacy. It is easy to lose the zest and joy in word play I find in the original. So here, for example, I have changed the last line [Despóis ¡facéme vivir!] rendered directly as ‘Then make me live’ by Aldaz, Gantt and Bromley into the version above which ties back to the first line. I have added a title. Academic opinion remains divided on de Castro titles. On her death she ordered that her daughter destroy manuscripts in her possession.

The following well-known poem however, is usually known as Lúa descolorida.

Bleached moon
like pale gold
you see me
but so high
on your orbit, lift me
into dear silent light.

Star of the orphan
pale moon
you cannot help
my sad spirit.
Raise me to your master
wherever he lives.

But tell him nothing
colourless moon
for I will never
be lucky again.
If you know death,
his obscure home,

tell him to take me
body and soul
to a place where
nothing is remembered;
not in this world,
not even your lunar height.

Argentine composer Osvaldo Golijov recently set Lúa descolorida in the original Gallego to a haunting accompaniment alongside a poem by Emily Dickinson in the same song sequence. Almost contemporaries, the two share stylistic techniques in their use of form, the four line ballad verse for example, simple diction and in their use of rhyme. In life, they were very different. Dickinson (1830 – 1886) a child of privilege remained a recluse. De Castro (1837 – 1885) was born illegitimate, a ‘sacrilegious’ child of a priest and spent her early years separated from both her parents by law. (This may have not been uncommon, de Castro’s mother was also from an aristocratic family.) They could not have been aware of each other’s work.

The tragic mark left on her life may account for her often expressed feeling of despair seen in all the poems that I include here. The following poem, for example, describes a lost or hunted dove described as [soia de rama en rama], literally ‘alone in branches of branches’. The medium that could construct a home becomes a cage.

Through hills and fields
trackways and on the coast
they glimpse a white dove
alone in twisted branches.

Following his poor cries
earthbound and tired
with no food,
they offer only kisses.

His feathers stained
which once were white
so very low
on shot-down wings.

Oh poor dove, once
so dear and so white.
Where did your spirit err?
And your love? Where has it gone?

De Castro’s work is more usefully seen in the context of the Celtic Revival. Her books in Gallego were the first to be written in the language, which had been proscribed, for hundreds of years. Her feminist consciousness most clearly expressed in: the final section of Follas novas [As viudas dos vivos as viudas dos mortos], ‘widows as a result of life and death’ also deserves further exploration. In her foreword she explicitly and unusually defines women as working outside and inside the home. As a result of her activism and poetry she remains well-known in Galicia and throughout Spain, her face even appearing on the 500 peseta note. 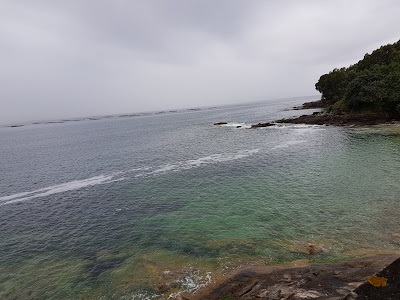 I would hope that this article would encourage more scholarship and more translations from those more able than myself. The subject matter is so stark yet with images of startling beauty but De Castro is neither constrained by form nor hesitant to use rhyme with great delicacy. This is a woman who can also produce the aural and visual bravura of lines like these:

De Castro’s life ended after suffering from cancer proving the first of the poems included here prescient. She moved to Carril on the Galician coast as her end drew closer so that her final views could be those of the sea.

They were chaotic days
reasonable afternoons
but her black sadness
remained untended.

leaving at early dawn
to return as light went,
nobody noted her
comings and goings.

One careless day
expected by no one,
she walked a path in sand
that could not be retraced.

Three days until
the sea gave her up,
the curve of the wave
here is her memorial.

To hear her poems sung in Gallego, try Rosalia De Castro by Amancio Prada. Shearsman have just published (2007) Selected poems by Michael Smith but more of Follas Novas can be found in Aldaz, Gantt and Bromley (SUNY 1991)

© Bridget Khursheed 2008 thanks to Sam Smith the editor of the Journal (once 'of Contemporary Anglo-Scandinavian Poetry') for encouraging me to write this article to accompany my translations.

Posted by Bridget Khursheed at 01:45