witness describes itself as taking the gospel back to its radical roots in a time that has whitewashed its message: a story of "a man executed by the state for saying things they didn’t want to hear" strikes an immediate attitude.

The new pamphlet from Jonathan Kinsman doesn't lie. The god word ends its dedication and then almost immediately snaps into the poems themselves. I think this word has to be dealt with first. This is a book about witnesses and it speaks through the stories of the followers of Jesus to refire the new testament. Let's just say it: this single word could stop a lot of people off buying the book and that would be a great shame. 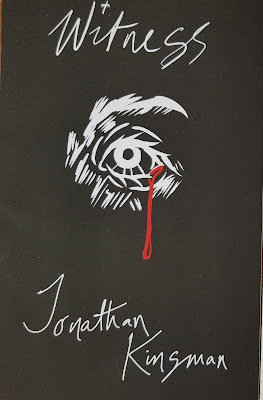 Confession: I am a vicar's daughter. It is probably the very last thing I want to tell people. Like Theresa May and Kevin Rowland & thank goodness the Brontes. As a teenager I erased it.

Yet this book reclaims a space I perhaps like many others gave away too willingly. The baby with the bathwater so to speak. The poems focus on the decisions, the mundane pain, the potential ignition:

so when god walks amongst you in those ramshackle streets
...whispers blessed is every last one you say
give me a gun, lord

That's the first thing to get out of the way; god is here in witness. The only weapons are words. Get used to it the poet says. Let this speak to you. And a word about the language; the poems need to be heard - I hope there are plans for a performance video. I read the poems out loud at the first reading spontaneously:

it begins outside , under the orange glow of a
lamp post while god smokes like he has been doing it
since fifteen. your ted baker suit a black stain  in
a crowd of charity shop jumpers and hand-me-down
boots. they're saying what, him?

and god says yeah, him.

your tears are
hot on your face like molten silver and the barrel sits heavy on
your tongue, tastes like blood. (they asked you the price of
a kiss. you didn't know it.)

Whether this book makes you rethink the gospel or whether you think that is a place you will never go, this is a book to savour from a poet of great honesty. This 14 poem sequence repays study of its alert, suggestive narrative and bold, reclaimed space. You can buy the book here and for more follow @manykinsmen

And compliments to Burning Eye Books for their tactile emphatic cover.

Posted by Bridget Khursheed at 08:43