I was rereading Kathleen Jamie's book of essays Sightlines while I was reviewing Samuel Tongue's ambitious and gratifying first collection Sacrifice Zones. In Jamie's well-known essay The Hvalsalen she visits the whale hall at the Bergen Natural History Museum in Norway and works some of her magic to reset the whale skeletons - even as they are being restored by museum staff - and our view, our way of seeing ourselves in relations to the whales, in this world we share. 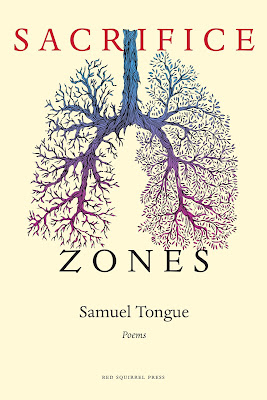 We work through something of the same process in Sacrifice Zones. The book is described as an exploration of "the meshwork and mess of living lives dependent on 'sacrifice zones'; places, peoples and animals that become expendable in the maintenance of civilised society." A view of the small isles with electricity pylons captures a pivotal debate:

Everything can change direction: the bee at the salvia
are newly political and the swallow swerves
into the gnat like a current jumping its cable

The collection looks closely and challenges our perception of animal and environment. Like the viewer's stance in the whale hall, we are implicated. Indeed human is so very close to animal that convict transforms into kangaroo in Not Government Issue:

A long tongue slides between his teeth, licks
his blue tattoos, tasting ink. There was a woman,
once, a child too - their names smudge under his hot rasp.

It is a recurring theme; we see gulls who "laugh down the chimneypots" until street is seashore in the full-throated What is it like to be a herring gull; and in the retelling of a Cheyenne/Navajo legend of Coyote It's long been on trend to turn your eyes into an I... the poet tries many forms of new eye/I while joyfully riffing through animal viewpoints; and transmigrates the very shape of things human, vegetable and animals in Mountain Hare

today, i catch a mountain hare in its form under frozen fists of bracken, eating the last of the snow. as if eating the snow will keep it white.

This poem also features one of the many lovely shifts throughout the collection between form and free verse which echo the sense of perceptive dislocation. And there is much to savour from the austere animal trials sequence to the pleasing inclusion of machine, technology and data. In Carhenge commodity is a already returning to earth

New car smell rammed into the roadbed until it stinks
of the earth's gut: muddy leaves,wet dog, plum-cake.

Its final lines "there are ugly gods - bitter in stomach, black in the lung" might describe the collections dogged questioning of the creed we have defaulted to - in an apparent absence of formal religion - connecting our faultlines spiritual and liminal by looking beyond.

Cover is superb - amazing work from Gerry Cambridge. And one small gripe - I don't like ALL CAPS headings for poems as used in this collection as I find them hard to read but trivial and maybe just me!
Posted by Bridget Khursheed at 03:10